The United States is outlawing our freedoms 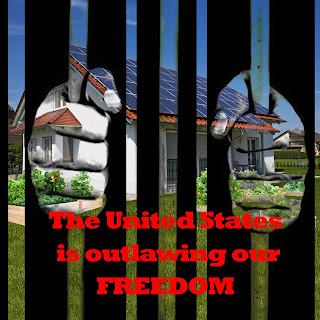 We live in a time where words like "permaculture" and "food forest" can get you arrested. In a time where calling yourself a "prepper" or someone that lives "off grid" can end you up on the FBI’s watch list.
Again, I find myself wanting to start with a definition of freedom. As I am using it, as it can be a word that can refer to so many things.

FREEDOM to me means the ability to wake up in the morning and do what I want with my time.
You are not free if you are paying
“To live somewhere”
“For water to drink”
“For power for your basic needs”
“For food that you need to live”

Let’s look at each of these by themselves.

In most towns it is illegal to be homeless. Homelessness is not what I am talking about when I say living somewhere for free. It is a fact that needs to be looked at when talking about our freedoms that are disappearing.  For now, let’s move on. We will come back to this in a later post, as this is a longer and more complicated issue. It covers how the system is designed to keep you either making a rent payment or homeowner payments or mortgage payments. All the way, to how in truth taxation of your land is non constitutional.

“For Water to Drink”

First we have all heard the crazy stories about people being arrested for gathering rainwater and while most of them end up not being 100% true some of them are not. Let’s look at it from a different prospective. Did you know that if you have a rainwater collection system hooked up to, let’s say your bathroom, and the city finds out, most of them will issue you a removal order. If you fight it you will end up in court.

In 99% of towns it is against the law to not be connected to the public water system and waste water removal, which you must pay for.  This is a big one. I mean if the city attacks you about this they come with the big guns. If you have kids, the first thing they do is attack you by opening a child protective services case against you. Next they attack you with health code violations and it just gets worst from there.
Arrested for Rainwater

“For Power for Your Basic Needs”

Many cities have laws governing wind turbines that make it unfeasible to use them in those cities.
Many cities also have laws against home generation of bio-gas and/or methane gas.
Florida is one of several states, mostly in the Southeast, that combine copious sunshine with extensive rules designed to block its use by homeowners to generate power.
solar laws make it hard to make your own power

“Food That You Need to Live” 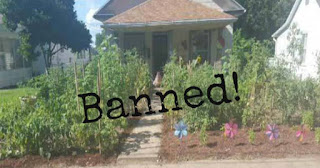 OMG this one is just insane and the cases just keep rolling in of more and more people being arrested or ordered to take out their gardens. Most of the time it is a city law that says "no gardens allowed on front lawns" that gets people here .
We also need to say here, that most cities have some sort of code enforcement about composting, as well many will allow it but only if you do it in the way they want, and have enough space between your home and your neighbors .
Join other Outlaw farmers

So what do we do as people that want to live free? How to we become free when the government wants us as financial slaves? It is simple really, we just do it! Start living your life as free as you can. Make actions towards true freedom every chance you get, even with the fear of the government or city trying to stop you. It is not just your right to be free, it is an obligation to fight any unjust law.  To inspire you to do so, here are what some of the other outlaws that have or are fighting  for our freedom have said!

Unjust laws exist: shall we be content to obey them, or shall we endeavor to amend them, and obey them until we have succeeded, or shall we transgress them at once?
Henry David Thoreau

One who breaks an unjust law must do so openly, lovingly, and with a willingness to accept the penalty.
Martin Luther King, Jr.

It seems to me that an unjust law is no law at all.
Saint Augustine

A unjust law, is no law at all.
Martin Luther

An individual who breaks a law that conscience tells him is unjust, and who willingly accepts the penalty of imprisonment in order to arouse the conscience of the community over its injustice, is in reality expressing the highest respect for the law.
Martin Luther King, Jr.

We must reject the idea that every time a law's broken, society is guilty rather than the lawbreaker. It is time to restore the American precept that each individual is accountable for his actions.
Ronald Reagan

An unjust law is itself a species of violence. Arrest for its breach is more so.
Mahatma Gandhi

There are two types of laws: there are just laws and there are unjust laws... What is the difference between the two?...An unjust law is a man-made code that is out of harmony with the moral law.
Martin Luther King, Jr.

If the machine of government is of such a nature that it requires you to be the agent of injustice to another, then, I say, break the law.
Henry David Thoreau

Before a standing army can rule, the people must be disarmed, as they are in almost every country in Europe.
Noah Webster

There is no justice in following unjust laws.
Aaron Swartz

Nothing is more destructive of respect for the government and the law of the land than passing laws which cannot be enforced.
Albert Einstein

Under a government which imprisons any unjustly, the true place for a just man is also a prison.
Henry David Thoreau

A military force, at the command of Congress, can execute no laws, but such as the people perceive to be just and constitutional; for they will possess the power, and jealousy will instantly inspire the inclination, to resist the execution of a law which appears to them unjust and oppressive.
Noah Webster

There is no justice in following unjust laws. It's time to come into the light and, in the grand tradition of civil disobedience, declare our opposition to this private theft of public culture.
Aaron Swartz

As long as the superstition that people should obey unjust laws exists, so long will slavery exist
Mahatma Gandhi